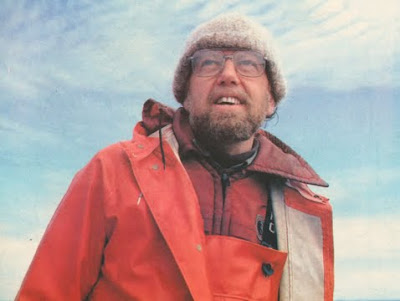 Thank you to Judy Lien for asking us to be a part of today's celebration. It is a very great honour to be speaking to you about the Great Whale Tour and how Jon inspired, Jon mentored, and Jon supported us and without Jon , it simply would not exist.

To date the Great Whale Tour is presently in phase 2 of a multi-phased, multi-million dollar project. Two whale pavillions, one in Triton and one in King's Point, Central Newfoundland will be open this summer. We hope there will eventually be 6 or 7. Each houses the reassembled bones of different species of whales. Education, research, tourism, conservation...are just some of the issues we intend to focus on at these sites. The final vision for the on-going project is the world's biggest display of whales, right here in Newfoundland and Labrador.

My wife, Linda Yates and I met Jon in 1998 when he and his international team arrived to dissect a bowhead whale in the White Bay/ Green Bay area. That very first meeting changed our lives and inspired us to found the Great Whale Tour in 2001. Jon constantly did so much more than seemed possible to me to move the project from just another crazy idea to a very hard won reality....Jon personally and tirelessly located whales, towed whales, cleaned whale bones, hired students, wrote letters, researched, imposed on colleagues, consulted on concept...really anything ou could think of, Jon did it for us. I'm sure he must have slept but I don't know when he found the time for it.... But why did Jon do so much?

It certainly wasn't for the money because we had no money in those days. In fact he invested more time and money than we could ever repay. It wasn't for fame. He wanted nothing more than for us to shine the spotlight on the new whale man and woman of Newfoundland and Labrador, Mr Wayne Ledwell and Ms Julie Huntington of the marine mammal release program. However, thankfully just a few years back, we were finally able to convince Jon that his name needed to become a visible part of the project, but only after we convinced him that it was really in the best interests of the project...so again why did he do so much? Two reasons. First he simply felt it was "the right thing to do"....and oh what a rare and beautiful quality that is in this world! And the second reason was it was yet another impossible project that he could make possible. Jon was a visionary optimist and catalyst unlike anyone else we have ever met!

In 2006 after 5 incredibly challenging years we received our first of two allocations so far of Provincial and Federal investment. "Dr Jon Lien's Great Whale Tour is now "out of the gate" and has a very long way to go...but it has the wonderful potential to continue to broadcast Jon's vision of stewardship, conservation, local benefits and what I call Jon & Judy's cohesive "planetarian" approach...not just humanitarian or just environmental but the reality of one connected blue sustainable planet for all.

In conclusion, Jon Lien supported many local ideas & individuals equally with national and international causes, with his passionate belief that the individual can and must make a difference. Linda and I hope all of you today will reaffirm in your hearts to continue to build on Jon's life work of caring combined with action. Thank you.

Donations to the Dr Jon Lien Memorial Scholarship Fund can be made online from the Memorial University of Newfoundland's home page http://www.mun.ca/ . Simply click on Alumni, then select "Donate Online" and make sure to designate the Dr Jon Lien Memorial Scholarship in the information box. If you know others who might wish to become part of this shared remembrance of Jon, please invite them to make a contribution, too!

To view a copy of the program for the Celebration of Jon Lien's life pls go to http://www.scribd.com/doc/31696172/Jon-Lien-Memorial-Program


Posted by david hayashida at 6:40 PM