"You really need to do a much better job of letting the public know about your many awards, nominations, successes...you're suppose to be living on the Rock not hiding your triumphs under one!" that's what people keep saying to us. So here we go ...sharing the top ten recent highlights of King's Point Pottery's successes but this is also THE PERFECT CHANCE TO HAND OUT OUR DUES... (ie. our achievements are mainly due to the incredible support of family, friends, colleagues, industry supporters ... new & long time customers!!! ) 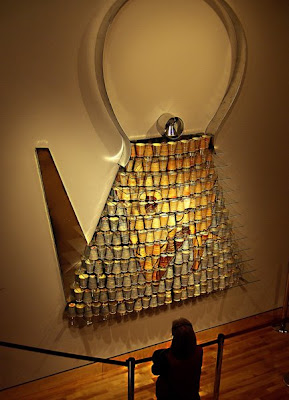 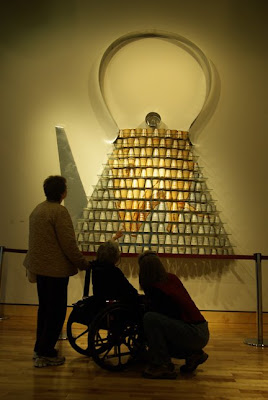 (Linda in front of salt-soda fired Secret...) (l to r: Miriam, Mom & Linda at opening.)
01.) 200 crafts persons from across the country have been selected to represent Canada overseas this September 2009 at the world's biggest craft exhibition..50 nations, over half a million attending! King's Point Pottery was selected with 2 pieces to be shipped overseas...what a double honour! We are still shocked by it all & crossing our fingers... hoping that we also might be funded to travel to Cheongju South Korea to do presentations on site. (Our good friend Isabella St John also has a ceramic work going and we three hope to travel to South Korea together!) Thanks go out to the Selection Jury(s)for the show, CCF, NLAC, ITRD and the Craft Council of NL, CCNL for all their amazing support!! 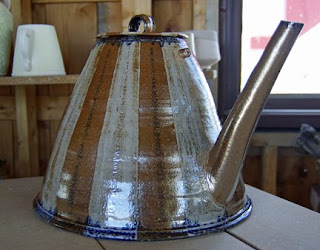 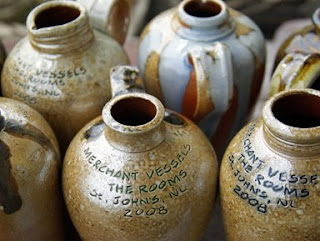 03.) Issue 76, June 2009 "Ceramics Art and Perception" of Australia has an article by Gloria Hickey called "Merchant Vessels". King's Point Pottery was one of the 4 teams invited by Gloria to participate in the wonderful "Merchant Vessels" show at the Art Gallery of NL last summer. What an honour to appear in such a well respected publication. Thanks to Gloria Hickey & Elaine Henry. 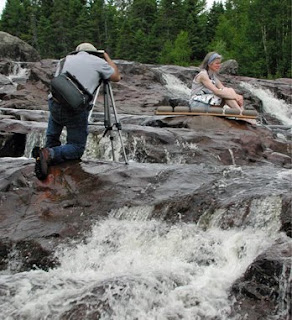 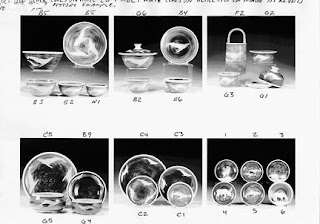 (David Tilley doing on site promo shots with over 300 salmon, one warden & one potter.)

04.) On May 09, 2009 we officially re-launched our new & vastly improved King's Point Pottery website ( http://www.kingspointpottery.com/ ) built by the web designer/photographer/writer....David Tilley ( http://www.wildnewfoundland.com/ ) Don't say that wasn't a ton of work! 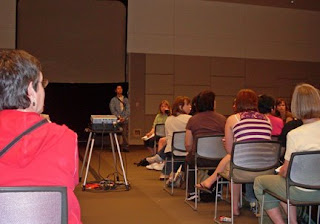 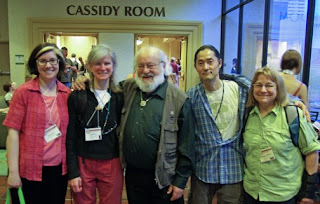 (Alexis, Linda, Robin Hopper, David & Arlynn Nobel at NCECA)
05.) NCECA the huge annual USA clay conference was held in Phoenix and David was invited to facilitate a Connections session/presentation on salt soda firing for which he contacted potters from around the world to showcase their new and innovative work. (We did apply for funding assistance from ACOA & ITRD and still hope that will be approved.) 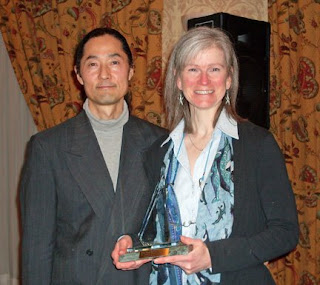 (Linda & David at the ACCAE in Halifax receiving award.)
06.) King's Point Pottery was the recipient of the "Award for Excellence in Product Design" at the Atlantic Canada Craft Awards for Excellence, ACCAE in Halifax in February, 2009. It is like the Oscars for craftspeople in Atlantic Canada! We were also asked to help judge the best new product, best booth and emerging artist at the Atlantic Craft & Trade Show, ACTS. Thanks go out to the Craft Council for nominating us and the ACCAE selection jury for their confidence. 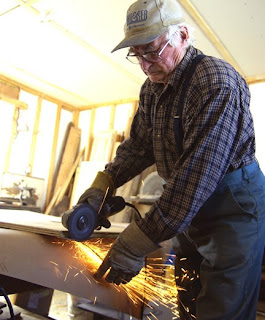 (Award winning Calvin Yates, jack of all trades.)
07.) We won the award for the "Best New Product" at the Annual Fine Craft and Design Fair in St John's for our innovative local rock glazed lidded jars in November 2008. Local provincial rocks and minerals create unusual and interesting results... if you don't mind all the time and effort researching, collecting & processing the various raw materials! Thanks to the CCNL selection jury for the honour and Calvin Yates for the technical assistance. 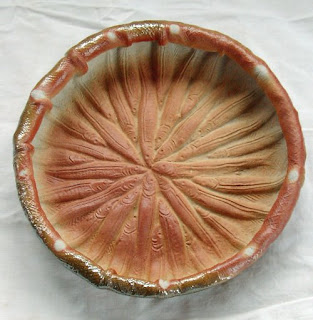 (Nickey's Nose Cove Capelin Dish, Salt-Soda fired.)
08.) Lark Books USA produces a wonderful book series called 500, where they ask for submissions from artists all around the world. They select the 500 best pieces... and in July of 2008 they published "500 Platters" in which they included a piece called "Nickey's Nose Cove Capelin" by King's Point Pottery! Many thanks go out to Juror Linda Arbuckle, Lark Books and NL photographer Ned Pratt. 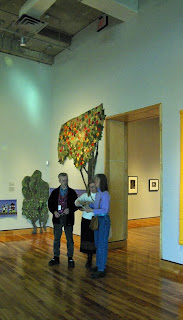 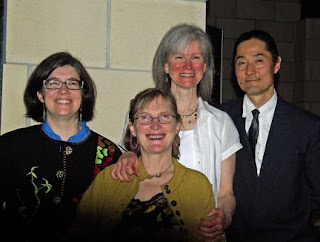 (l to r: Bruce Johnson, Gloria Hickey & Linda Yates planning layout at the Rooms.)
(l to r: Alexis Templeton, Isabella St John, Linda Yates & David Hayashida at the opening. Missing from the photo is Deb Kuzyk & Ray Mackie of Lucky Rabbit Pottery)
09.) In June 2008 there was the first major ceramics group show held at the Art Gallery of NL, called "Merchant Vessels". Gloria Hickey guest curated the fabulous show and she generously invited us to participate along with 3 other ceramic artists. What an incredible opportunity and thrilling occasion to share with friends and family. Thanks to everyone who supported us over the years...it was a glorious NL moment that we will always treasure! Our best to the dedicated and talented Gloria Hickey, the other amazing artists, everyone at the Art Gallery, CCNL, ITRD, ACOA....and our customers for making it possible! 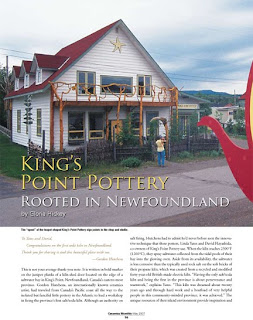 10.) Everyone who is involved with clay in North America (and indeed around the world) hopes that one day they might appear in the pages of Ceramics Monthly, CM the world's largest ceramics magazine. In May of 2007 King's Point Pottery had a major article authored by the amazing Gloria Hickey appear in CM!!! To say it was a childhood dream come true is an understatement! We hope this is just the beginning of a very long & passionate journey in clay but no matter the length, we are very grateful for what we have been able to achieve to date and hope we can somehow repay the generosity so many have kindly bestowed on us from the very beginning! ...cue the music.."..we've had the time of our life and we owe it all to you (& u & u...)"
Posted by david hayashida at 8:25 AM