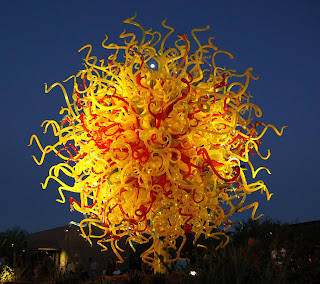 Big News "1" The reconstructed website is almost done ...1-2 weeks max. and it will be unveiled!! Any one thinking of creating or recreating their site multiply the estimated effort by 3 or 4 augh!!!!! But do I love the new site? Yes, YEs, YES!!!

Bigger News "2" NCECA in Phoenix was fabulous. We were selected to lead a discussion session on Salt & Soda firing! And the amazing Soda fire innovator Gail Nichols from Australia was there to field questions!! Thank you so much Gail! Just love NCECA...1700 images on just one of our three cameras!

Biggest NEWS "3" Best for last... we just were informed that one of our clay pieces has been accepted to Korea - 'Unity & Diversity' Exhibit - Cheoungju International Biennale - September 23 -November 1, 2009 via the Canadian Craft Federation. Wow...what an honour. Dancing in the streets time!!!!

Lots more but I'll add to this tomorrow. How about a pic from NCECA which might surprise some because it's not clay rather it is ceramic or rather glass I should say Dale Chihulli (spelling error I'm sure).
Posted by david hayashida at 6:15 PM