Whales have arrived in King's Point! 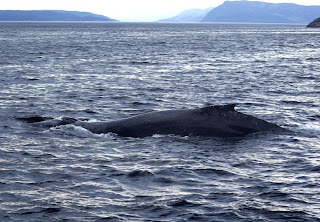 (Image by D Hayashida)
Notre Dame Bay...is it thee famous Humpback of Notre Dame?
Whale Alert: 2 Minke whales and 1 Humpback Whale touring King's Point's slowly melting iceberg! Also a BIG berg in Jackson's Cove!!!(14 June) While I didn't get a picture of the three of them today but I've lots of images that you may not have seen before and a (longish but with fun shots) story to go with them.
To say I have a fascination with Cetaceans, whales is a bit of an understatement. As soon as I arrived here in NL in 1993 I met this character.

(Image from D.Hayashida) A Humpback Whale about 50 feet long and Newfoundland has one of the world's largest summer populations...lots of them to watch!!! Meeting a whale is one of life's truly unforgettable moments (I hope all of you get the chance to meet them in the wild some day soon) and it certainly has changed my life. But not as much as meeting Dr. Jon Lien in 1997. 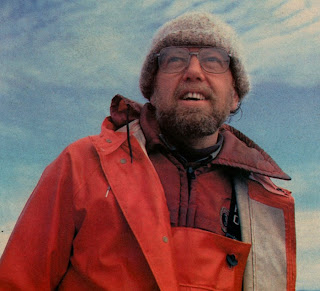 (Image from Lien Family) The friend of fisherpersons and whales all across Newfoundland and Labrador. His whale research group saved more whales than anyone else in the world! His infectious enthusiasm for the people of NL, the whales and the environment of this province has been catalyst for many people including myself. (Wayne Ledwell and Julie Huntington are doing an amazing job having taken over for Jon in doing whale release....) Dr Lien helped me articulate/build my first whale skeleton, a white beaked dolphin. 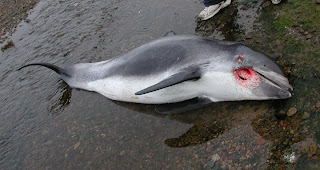 (Image from D Hayashida) Before reconstruction. 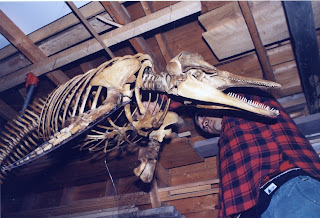 (Image from Linda Yates) After reconstruction.
Ever since 1997 he has been helping our region with a whale museum project that we hope will one day be one of the world's largest displays of whale skeletons & information pavillions (built from whales that have died from natural causes). The rare arctic Bowhead Whale was the first whale to wash ashore and while the bones were cleaned via Dr Lien & Alma Guy some time ago ...we still have it on our important to do list to have it completed and displayed. 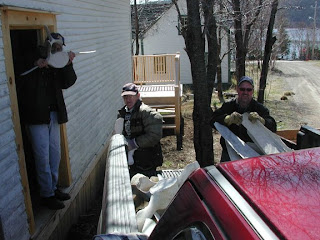 (Image from Linda Yates) Here we see our dedicated volunteers Dennis Burt, Harvey Andrews & Ron Cakes helping move the Bowhead Whale bones into storage. In 2001 with the help of Alma Guy, GBEDA and Linda Brett, the then Executive Director of the Emerald Zone Corporation we started what will become Dr Jon Lien's Whale Ecomuseum Tour, which will include 6-8 towns from our Great Whale Coast region.(Westport, Middle Arm, La Scie, Baie Verte, Springdale, Little Bay Islands, Triton and King's Point) The Emerald Zone, EZC has been the glue that has kept our regional group together and moving forward...people like Chris Tuck & Randy Regular, the past and current development officers at the EZC have been the key facilitators in the trenches!

Of course we have met quite a number of whales here in King's Point since then, including this very inquisitive fellow. Cathy Kinsman of the Whale Stewardship Project helped to name the young whale "Kuus', which is a Beothuck/aboriginal word for 'moon' because of the shape you see when he surfaces to breath. He was a fun-tastic neighbour to us for an entire fall season! 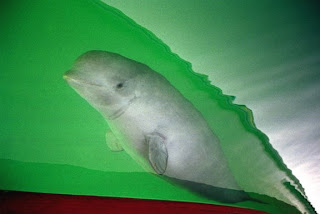 (Image from Linda Yates) This year (2009) there was a record number of beluga whales sighted off the northern penninsula earlier this spring. We have always seen a few solitary belugas but never a giant pod...is it global warming...what does it mean when arctic animals start moving south? 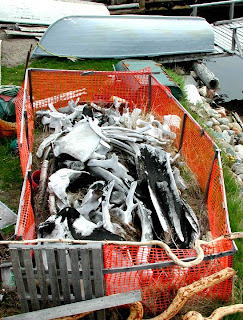 (Image from D Hayashida) Can you guess what all these bones are from? Believe it or not they are the semi-cleaned bones of a gigantic 50 foot female humpback whale that drowned in Crab Gear in 2001. (Wayne Ledwell of Dr Liens Marine Mammal Rescue Group and Captain George Saunders of Cobbs Arm were able to save the youngster travelling with the mother but unfortunately not able to save the female.) 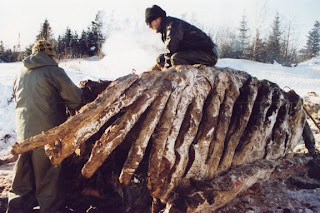 (Image from Linda Yates) This is a picture of two of the amazing (freezing) volunteers Kim Janes and Cal Cutler helping me take apart a frozen yet very smelly-oily 48 ton dead whale. Words can not describe how grateful I am for all the many volunteers that took part in the long difficult recovery process...thank you all so very much...I won't forget it and I'm sure you won't (be able to) either!

(Image from George Saunders) Since you have seen the dry bones, the stinky ribs...here is an image of the whale just after it drowned. The decompostion gases tend ot inflate the body into a temporary giant balloon...later it sinks to the ocean floor and becomes food for smaller sea creatures....the circle of life, eh! 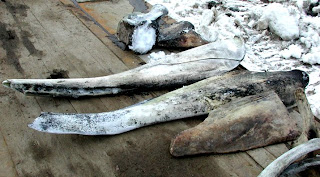 (Image from D Hayashida) Jaw bones of a sperm whale.
The next whale for our regional project was recovered by the town of Triton. Rick Fudge (while on crutches!!) got their whale team together and they went to the Codroy Valley on the west coast and cut out the bones of a long dead 43 foot sperm whale, a.k.a. the world famous "Moby Dick". 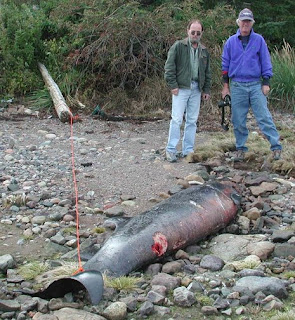 (Image from D Hayashida) Cal Cutler and Wayne Ledwell with a Sowerby's Beaked.
The next whale for the regional project was a Sowerby's Beaked Whale for the Town of Westport on the Baie Verte Pennisula. Thanks to years of hard work around the volunteer table by Daphne Warren (with Dr Lien's kind assistance) Westport had their bones cleaned.

(Image from D Hayashida) 80 foot Fin Whale near Middle Arm.
The next feat of super human volunteerism was by Ben Hull's energetic team from Middle Arm. They drove all the way over to Branch by Cape St Marys (and with the help of Wayne Ledwell and Tony Power and friends) recovered was is to date our biggest whale at 60 feet long!

(Image from D Hayashida) Minke whale with gulls & rough ice.
The town of La Scie at the end of the Baie Verte Penninsula was the next group to get their whale bones. With the help of Ben Hull and the EZC, the town of La Scie's group recovered the bones from a Minke whale.
Little Bay Island came close a few times to getting their whale bones but lady luck has just not been on their side yet. They will one day recover the bones of an Orca that Dr Lien buried many years ago. 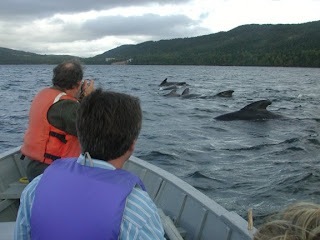 (Image from D Hayashida) Cal Cutler shooting images of Potheads...aka Pilot Whales)
The town of Springdale is the current leader with 2 recoveries to their credit. Again a huge team effort lead by then Mayor Kevin Pollard (now MHA) Don Huxter, Wayne Ledwell, Carl Gillard and the Springdale Heritage Society and Springdale Town Council. They have recovered both a Narwhal and a Pothead whale.
Well there is so much more to tell but we'll leave that for another day!! Thanks for reading. Best Fishes...David
Posted by david hayashida at 7:42 PM